If you’re looking for a Blink home security review, it’s probably because you’re shopping for an affordable security system to protect your home. It’s no secret that Blink provides one of the most affordable non-monitored security systems on the market.

However, you can’t exactly blame someone for being skeptical. After all, we all know you get what you pay for.

That’s why it’s so important to do your research beforehand. Before committing to a purchase, you need to know if Blink can really do everything it claims.

Is it reliable? Is it difficult to use? And how does it measure up to its competition? These are some things you need to learn in a Blink home security review.

What Is the Blink Home Security System?

Although this means your home will not be monitored 24/7 as with other security systems, it also saves you from having to pay a hefty subscription fee every month. That makes it a good option for people who want protection but don’t have a lot of money to spend.

With Blink, you get all the information you need right from your smartphone. You’ll be notified any time one of the motion sensor cameras activates, and you can also live stream any camera whenever you like.

Keep in mind that with this system, it is your responsibility to alert the authorities in case something happens. This is opposed to a security service in which the authorities are alerted for you.

What Else Do You Need to Know in a Blink Home Security Review?

There’s obviously much more to learn in a Blink home security review. Here are some more useful facts that may help you make a decision.

What unique features does it have?

If you're interested in Blink home security, review its features first. One of these is a motion-activated camera which begins recording the moment any movement is detected. The videos record in 720p HD, so you get a crystal clear view of what’s happening. These videos are then instantly sent to you through your phone so that you can decide what to do next.

On top of all this, you can also live stream any camera at any time you choose. This system also features an auto-arm/disarm function, multi-system support, and even voice control with Alexa.

Finally, Blink has a very impressive battery life. It can run on two AA lithium batteries for two years. With all of these great features, it’s no wonder that Blink is one of the fastest-selling security systems on the market.

Is it difficult to install?

Anyone who’s ever used a home security system before knows they’re not always easy to set up. This can be a source of intimidation for many potential buyers.

Luckily, that’s not the case with Blink. In fact, in every Blink home security review, not a single customer had anything negative to say about the installation process. On the contrary, many of them went out of their way to say how easy it was to install.

Also, customers have found the app to be incredibly easy to use, and cameras connect with the sync module very easily. Overall, you should never have any trouble getting this system up and running.

What are the different options you have to choose from?

Blink has a few different options to choose from depending on your budget and your needs. The main options you have to choose from are between Blink and Blink XT.

The differences between these two products are how they are used. Blink XT is weatherproof, and you can use it both indoors or outdoors. On the hand, the basic Blink cameras only work indoors. If you're thinking about using Blink home security, review these two choices carefully.

Once you’ve decided which is best for you, you’ll decide how many cameras you need. Both are available in one, two, three, and five cameras systems. Add-on cameras are also available as needed. When making a decision, be sure to consider your needs and how much money you have to spend.

Generally speaking, most customers have been very happy with this system. Again, many commented on how easy it was to install.

Nearly every Blink home security review we researched also mentioned how affordable it is, and they appreciated that there’s no monthly subscription. Furthermore, they enjoyed its variety of features and the clear HD recording. Many people who bought it have already had success catching criminals in the act.

This product has had its fair share of complaints as well. The most common complaint is that its difficult to adjust the motion sensitivity. The sensitivity will almost always be either too high or too low, no matter how you adjust it.

Several people also said that it takes too long for it to begin recording. This can cause you to miss important details. Additionally, many suspect its highly lauded battery life might not be as great as it claims.

That said, the positives generally outweigh the negatives in almost every Blink home security review.

How Much Does It Cost?

Other options will lie somewhere in between these price ranges. Keep this in mind when deciding which option is best for you.

You can buy the Blink home security system online at their official website or Amazon. You can also find it in brick and mortar stores such as Best Buy and Lowe’s. 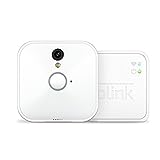 For the following reviews, we used Amazon and the products’ official websites as our main source of information. Furthermore, our opinions of these products are mostly based on customer reviews from Amazon. We chose to focus on a few critical aspects of these reviews. These include price, ease of use, reliability, and extra features.

How Does It Compare to Other Home Security Systems?

Of course, a good Blink home security review should show how this product compares to its competition. Obviously, there are many systems out there that offer similar services. Let’s see how Blink measures up.

Arlo is among the most popular non-monitored security systems on the market today. Like Blink, Arlo uses motion-sensor cameras that you can live stream through your phone.

These cameras are weatherproof and use rechargeable batteries. They also feature HD video and two-way audio. Furthermore, they have night vision and can use USB storage for backup.

Most customers have been perfectly happy with the Arlo security system. They felt it was very easy to install and easy to use. They also loved its long battery life and crisp, clear audio. On top of this, the USB storage system proved to be very useful.

Unfortunately, many customers complained about its poor picture quality. Many felt it was much too pixelated for the price. And like Blink, it tends to suffer from slow startup.

With the Arlo security system, you can choose between one to six cameras. Depending on which you choose. This is quite a bit more expensive than Blink.

Overall, the two systems have very similar features -- and very similar problems, as well. With that in mind, you may be better off sticking with the less expensive alternative.

Like Blink, iSmartAlarm is another affordable non-monitored home security system. Just like the previous systems, it sends notifications straight to your phone whenever a camera is triggered, and it has no monthly fees.

The built-in 110 dB siren is one unique feature that can scare away potential intruders. Their starter pack comes with a contact sensor that can guard doors and windows, a motion sensor which can detect motion up to 30 feet away, and a pocket-sized remote tag that allows you easily arm or disarm the system. These are all controlled by the CubeOne central hub.

Most customers appreciated how affordable this system is, and they felt the contact and motion sensors work exactly as they should. Several also thought the siren was a very useful feature.

However, many customers also felt that this is an unreliable product in general. Several had difficulty setting it up, and it tends to have major issues whenever the internet goes down. Also, many people felt the siren isn’t as loud as it should be.

While it is relatively affordable in its own right, it still doesn’t compare to Blink’s prices.

And although it does have some interesting features, it tends to be unreliable. Blink does have a few issues of its own, but they’re generally not as severe as iSmartAlarm. 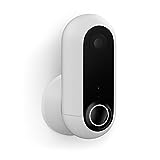 Canary is another good option for a non-monitored home security system. Like iSmartAlarm, it can use a siren to scare away crooks. You can also set it to monitor for activity during the night or while you’re away.

Unlike the other items on this list, you can unlock some extra features for a monthly fee. This includes two-way audio, a safety button that sends police to your exact location, and 30-day video history.

Most of Canary’s customers found it to be very easy to install. They also felt the cameras worked exactly as they should, and they loved its extra features.

However, the fact that you have to pay for many of these features was a major source of frustration for many people. This, unfortunately, extends to long-time customers who used to get these services for free. It’s a good system, but you have to pay to get the most out of it.

The Canary home security system is available in one to three camera packages.

For the most part, Canary is a very good system and is a worthy contender to the Blink home security system. Unfortunately, the fact that you have to pay a monthly fee to access all of its features is a major drawback. You’ll have to decide for yourself whether it’s worth it or not.

As you can tell from this Blink home security review, Blink is a very decent system. This is especially true if you’re on a budget. It’s super affordable, effortless to use and install, and it has impressive battery life. As mentioned before, several customers have successfully used it to catch criminals in the act.

But unfortunately, you do have to expect some issues with this system. It’s difficult to adjust its motion sensitivity just right, and it’s sometimes slow to start.

Is This What You Need to Keep Your Family Safe?

As you’ve seen in this Blink home security review, Blink offers a product that can potentially protect you from a dangerous situation. It’s already helped many of its customers identify thieves and intruders, and it can easily do the same for you.

While it does have a few issues, these issues will be common to most non-monitored security systems. Unfortunately, you can only expect so much from these devices.

Nonetheless, if you’re low on cash and looking for a way to protect your home and family, Blink is a very strong option that you should definitely consider. It might be exactly what you need to keep your family safe.

The Only Scout Alarm Review You Need to Read

10 Home Safety Tips You NEVER Would Have Thought Of